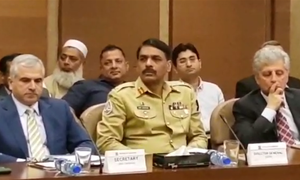 Director General of Inter-Services Public Relations (ISPR) Maj Gen Asif Ghafoor on Thursday, reiterating his stance from a press conference held earlier this month, rejected the notion that the security forces have any direct role in how the July 25 elections will unfold.

Speaking at the special session of the Senate Standing Committee on Interior, DG ISPR clarified that the army personnel are only following the Election Commission of Pakistan’s instructions.

“There were some rumours that army personnel had been issued ‘different’ orders — this is completely baseless,” he said. “We do not have any link with the elections; we are only working on the election commission’s directives to improve the law and order situation. We do not have a direct role in polls.”

Major General Ghafoor then elaborated the election duty assigned to army personnel, saying: “The armed forces have always lent support to civil institutions. The security situation is being improved in the entire country to hold elections.

“Three hundred and seventy one thousand army soldiers will be deployed at the countrywide polling stations. The army is also performing its duty at the printing press [for ballots].”

When asked by PML-N Senator Kulsoom Parveen to disclose the number of troops being deployed in Balochistan — where a suicide blast at a political event killed around 150 people — the DG ISPR said: “Leave the planning side to us; we know how many troops have to be deployed where. We have analysed every place from a security point of view. We have made deployments as per the need in Balochistan.”

Maj Gen Ghafoor, however, made it clear that the army’s role in providing security for elections did not mean that it would also take direct responsibility for the well being of politicians.

“Unfortunately, until the police’s abilities improve, we will also have to do police duty.”

Speaking of coordination with Afghanistan, the ISPR spokesperson said that Pakistan has been assured of reciprocal support from the Afghan side on the security front. “When the elections took place in Afghanistan, we took extraordinary measures on this side of the border. This time, the Afghan president phoned Pakistan prime minister and the army chief to assure us of their cooperation.”

The Senate session was presided over by the committee chairperson Senator Rehman Malik. Federal interior and defence secretaries, secretary ECP and several other government officials were also present in the meeting.

Army personnel will work under the presiding officer: ECP secretary
In the same session, ECP Secretary Babar Yaqoob also briefed the Senate body over the army’s electoral duties among other things.

“A total of 800,000 security officials and 700,000 ECP staff will perform their duties,” he said. “Bearing in mind the events of 2013, the ECP took the decision to deploy army. We are grateful to the army. Their officers are also being trained. The army’s help was also obtained to keep a watch on ballot papers.”

Senator Javed Abbasi asked whether army is deployed inside and outside [the polling stations] in other countries as well. To this, the ECP secretary said that the decision was taken in the light of “the security situation of our country and the threats coming to the polling stations according to the Nacta (National Counter Terrorism Authority Pakistan) briefing”.

“So we would obviously have asked the army and police to improve security,” he added.