﻿ Imran wants to build trust-based relationship with US | Millat Online

Imran wants to build trust-based relationship with US 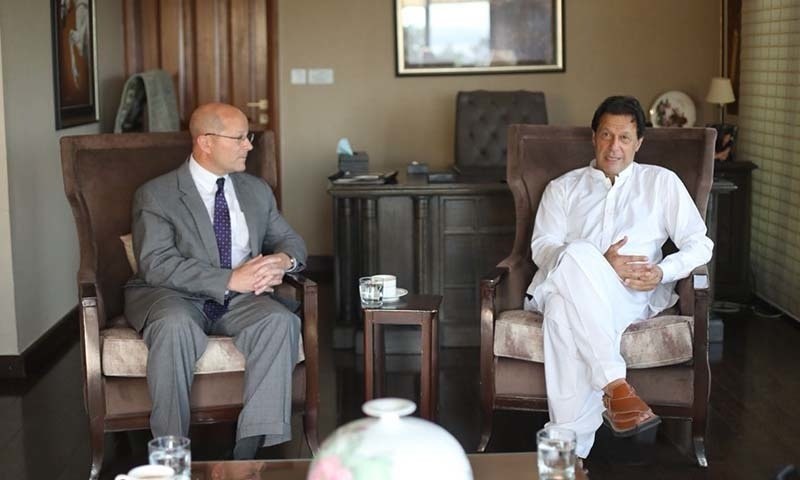 ISLAMABAD: Pakistan Tehreek-i-Insaf (PTI) chairman Imran Khan has said that his party wants to build relationship with the United States based on trust and mutual respect.

Talking to US acting Ambassador to Pakistan John F. Hoover who called on him at his Banigala residence on Wednesday, the prime minister-in-waiting said Pakistan and the US had witnessed many ups and downs in their relationship, which were the outcome of trust deficit between the two countries.

He said: “Our government will engage with the US to make this relationship more balanced and trustworthy. We count trade and economic relations with the US extremely important.”

He stressed the need for revitalisation of diplomatic ties between the two countries and transforming the relationship for the benefit of both Pakistan and the US.

According to PTI’s media cell, the US delegation and PTI chief discussed issues of mutual interest, including Pak-US relations, bilateral trade, and stability in Afghanistan.

Mr Khan said: “I am glad that people in the US have ultimately started acknowledging significance of political solution as conflict and use of force can add to the damages instead of breeding a sustainable solution to the crisis.”

He said stability in Afghanistan was in the larger interest of Pakistan, America and the region which could be achieved through viable political engagements.

Meanwhile, Iranian President Hassan Rouhani telephoned Mr Khan and invited him for a formal visit to his country — an offer which the PTI chief gladly accepted.

The Iranian president congratulated Mr Khan over his party’s victory in the recent elections.

They discussed issues of mutual interest, including Pak-Iran relations and bilateral trade.

President Rouhani was quoted as saying: “Pakistan and Iran are not merely neighbouring countries but also bonded by religious and cultural values.”

He said Iran wished to strengthen trade and diplomatic relations with Pakistan.