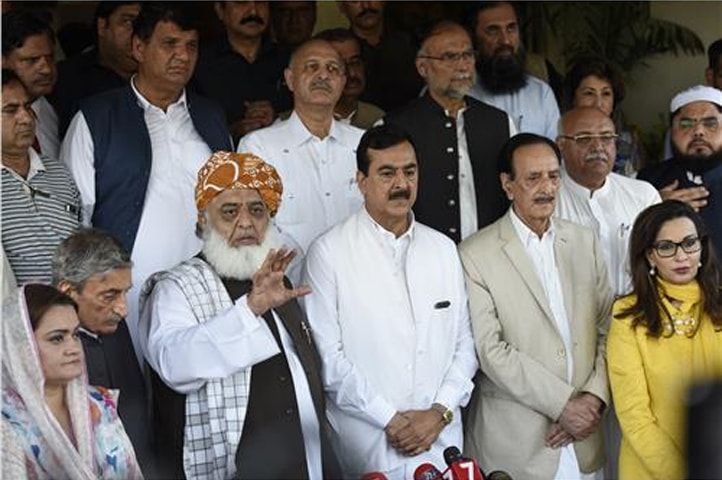 Opposition parties held a protest demonstration outside the Election Commission of Pakistan (ECP) in Islamabad on Wednesday against alleged rigging in the July 25 general elections. PML-N Chairman Shahbaz Sharif, however, was not in attendance.

The PML-N chairman could not fly to Islamabad from Lahore due to bad weather, said party spokesperson Marriyum Aurangzeb.

The decision to hold the protest was made by the newly formed 11-party grand opposition alliance, named ‘Pakistan Alliance for Free and Fair Elections’, at a multi-party conference held in Islamabad on Friday.

Maulana Fazlur Rehman, chief of his own faction of the Jamiat Ulema-i-Islam and president of the MMA, who arrived after the protest had been going on for a few hours, said: “The only reason why all political parties have joined hands today is because the ECP failed to conduct free and fair elections.”

Leaders of the PML-N, according to reports, refused to address the gathering when they were invited to do so.

Workers numbering in hundreds gathered in the capital. Participants chanted slogans about their respective political parties as well as the alleged rigging. Security officials were deployed in the area to maintain law and order.

The opposition leaders have also decided to register a strong protest inside and outside parliament during the first sitting of the National Assembly, which according to Caretaker Information Minister Barrister Ali Zafar on Wednesday would be called between August 12-14.

Earlier, sources in the opposition had said that the parties have asked all their elected members and ticket-holders to reach Islamabad to participate in the demonstration. They said that the workers had not been asked to attend Wednesday’s event and they would soon be given a call for such protests across the country.

The opposition alliance has also given a call for holding protests outside the offices of the provincial election commissions on Thursday. They also have a plan to hold a public meeting in Islamabad soon after Eidul Azha.

The opposition parties plan to organise a “national conference on rigging” in which not only political parties but members from civil society, lawyers and journalists would also be invited.