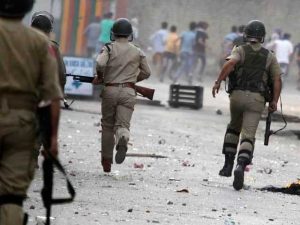 Four soldiers and two suspected rebels were killed on Tuesday in a gunbattle along the highly militarized de facto border that divides the disputed region of Kashmir between India and Pakistan, the Indian army said.

The six combatants were killed in fighting that erupted after a group of militants crossed from Azad Jammu and Kashmir into the India-held portion in Gurez sector, said Indian army spokesman Col. Rajesh Kalia.

Military authorities rushed in a reinforcement of soldiers to the mountainous and forested area where they were still conducting searches for other possible militants.

One among the army’s fatalities was an officer.

There was no independent confirmation of the incident.

Most Kashmiris support the rebel cause that the territory be united either under Pakistani rule or as an independent country while also participating in civilian street protests against Indian control.

Rebels have been fighting Indian control since 1989. India accuses Pakistan of arming and training the rebels, a charge Pakistan denies.

Nearly 70,000 people have been killed in the uprising and the ensuing Indian military crackdown.