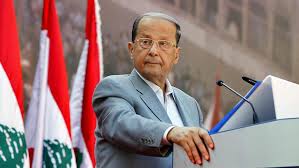 Beirut, Aug 7 (AFP/APP):Lebanon’s president said Friday that a cataclysmic port blast was caused either by negligence or a missile attack, but rejected widespread calls for an international probe.
The explosion that killed more than 150 people and wounded at least 5,000 on Tuesday could have been “negligence or foreign interference through a missile or bomb,” Michel Aoun told reporters.
It was the first acknowledgement by a Lebanese official of the possibility that Tuesday’s earth-shaking blast may have been caused by an attack.
Authorities had said a fire at the port had ignited tonnes of ammonium nitrate stored for years in a warehouse.
Lebanese nationals, advocacy groups and foreign heads of state had called for an international investigation into the blast to ensure impartiality, but Aoun rejected such an initiative.
When asked by a journalist during a televised interview if he thought an international probe would obscure the truth, the president answered “of course”.
Moments later on his Twitter account, Aoun spelled out his position further, saying: “the goal behind calls for an international investigation into the port issue is to dilute the truth.”
The ageing president did call for “swift justice,” vowing the government’s probe would spare neither top-level officials nor regular employees.
He confirmed that 20 suspects were being interrogated already.