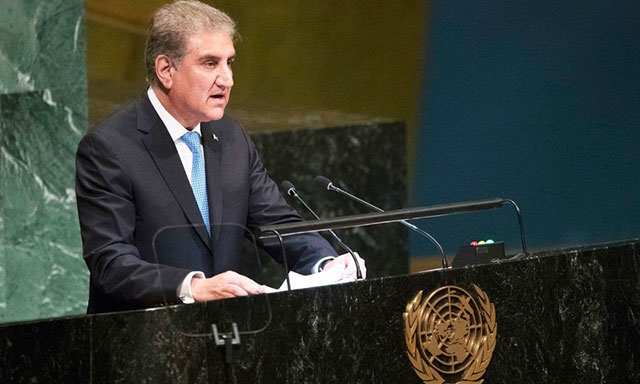 NEW YORK: Foreign Minister Shah Mehmood Qureshi has said that he sees a palpable and distinct change in the perception of international diplomats about the festering Kashmir dispute.

He was talking to reporters here at the end of his six-day visit to the United Nations during which he attended the 73rd session of its General Assembly as the new representative of Pakistan.

Mr Qureshi said the damning UN Human Rights Council’s report on the state of human rights in India-held Kashmir — which is ignored by India because it details the occupying forces’ atrocities in the valley — had opened the eyes of international diplomats to the humanitarian tragedy in Jammu and Kashmir.

The main thrust of the UN council’s report dealt directly with the severe repression employed by Indian forces against a majority Muslim population in held Kashmir.

The evidence-based report on the brutalities of Indian security forces in held Kashmir had, in fact, endorsed what Pakistan had been telling the international community about the situation there, he added.

All in all, Mr Qureshi was of the opinion that diplomats at the United Nations were more sensitised to the Kashmir dispute than ever before. He said that during his six-day visit he had had 54 interactions with delegates to the UNGA, including 22 bilateral and 11 multilateral meetings.

“I presented Pakistan’s case to my counterparts as representative of the new government,” Mr Qureshi said, adding that one of his priorities was to reconnect Pakistan with nations that the previous government had virtually ignored.

The foreign minister said he was glad to see that Pakistan was looked at with respect for its positive role at the United Nations, especially as a leading troops’ contributor to the UN peacekeeping operations. He said UN Secretary-General António Guterres had described Pakistan as a “privileged partner of the UN”.

Mr Qureshi said he took the opportunity to draw Mr Guterres’ attention to the jingoistic rhetoric from New Delhi and asked him to warn India against embarking on any misadventure against Pakistan.

The UN chief is due to visit India next week.

Anwar Iqbal in Washington adds: Meanwhile, the Trump administration has added another destination to Foreign Minister Qureshi’s meeting points in the US capital as he would now also visit the White House on Tuesday for talks on bilateral relations.

Mr Qureshi, who arrives in Washington late on Sunday, will spend Monday with Pakistani diplomats and experts, preparing for the crucial talks that begin on Tuesday. The White House is likely to be his first stop on Tuesday where he is scheduled to meet National Security Adviser John Bolton for talks on untangling Pakistan’s ruffled relations with the United States.

From the White House, he proceeds to the State Department for his second meeting, with Secretary of State Michael Pompeo.