US limits contacts with Afghan military after insider attacks 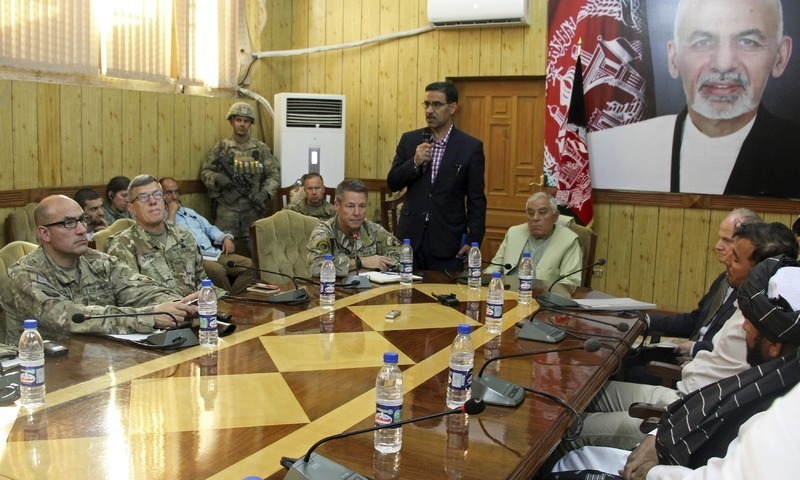 WASHINGTON: The US military in Afghanistan has halted most face-to-face contacts with the Afghan security forces and has temporarily withdrawn troops from Afghan security facilities after recent “insider” shootings, US media reported on Thursday.

Two key Afghan officials and a Nato soldier were killed in the attacks that began last week while a US brigadier was also injured. The top US commander in Afghanistan, Gen. Scott Miller, was also present at a facility in Kandahar where an insider attack last Thursday killed provincial police commander Gen. Abdul Raziq and intelligence chief Abdul Momin.

Gen. Miller had left the facility minutes before the attack.

A spokesman for the US-led military mission in Afghanistan told The Washington Post that recent attacks by Afghan security personnel on foreign troops forced them to take this “standard” precautionary measures.

The two forces were now communicating by telephones and emails while “some meetings [are] also taking place in US facilities,” the spokesman said.

A senior Afghan military officer told The Post that American troops “have been ordered not to visit the Afghan side of our base for a few days, but we can visit them on their side”.

The officer, however, clarified that the joint control and command centre was still active.

A US military newspaper Stars and Stripes reported that the Pentagon ordered about 100 members of a US Army training brigade to continue to stay in Afghanistan even after they complete their tour of duty next month. They will now return in February.

Gen. Robert Abrams, head of US Army Forces Command, who oversaw the creation of the training brigades, said the schedule had been rearranged to avoid a month-long gap in training Afghan forces.

The rescheduling “comes amid a surge in Taliban violence as Afghanistan enters its 18th year of war, and reflects concerns that progress made by the first brigade of elite Army advisers could be eroded by the pause in training”, the report added.

US media noted that the decision to limit contacts between Afghan and foreign troops reflected “rising concerns about the safety of American and other foreign forces” after the Kandahar attack.

“That slaying created a dangerous security vacuum in the south and fuelled rumours that the United States had been behind the plot to kill Gen. Abdul Raziq.” American officials have dismissed the charge “as absurd”.