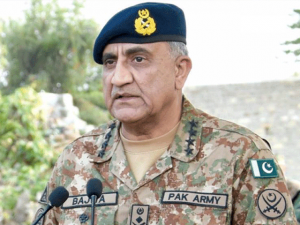 (Karachi) Chief of the Army Staff General Qamar Javed Bajwa met a delegation of traders on Wednesday and assured them that the issues of the city would be resolved soon, media reported.

During the meeting, the traders conveyed their grievances to the army chief and urged him to bound the electricity, gas, water and other utility providers to solve issues faced by the city.

They said Karachi pays a tax of Rs 2,600 billion annually and therefore its issues should be solved on a priority basis. The traders said the recent downpour halted all industrial and economic activity in the metropolis badly affecting the business community.

On the occasion, the COAS said that a committee has been formed comprising the representatives of federal and provincial governments to solve the issues faced by the city. He mentioned the business community would also be given representation in the body.

Bajwa maintained that issues facing the city, including road infrastructure, water, power and gas would be resolved on priority.

The army chief reached Karachi on a two-day visit on Tuesday. He was flown over the city for aerial reconnaissance of the ground impact of urban flooding.

The COAS was briefed about worst urban flooding in the recent history of Karachi and Army’s support to the civil administration across Sindh and particularly Karachi. He was apprised that unprecedented rains combined with decades of urban congestion, unplanned population settlement as well as infrastructural issues compounded the problem.