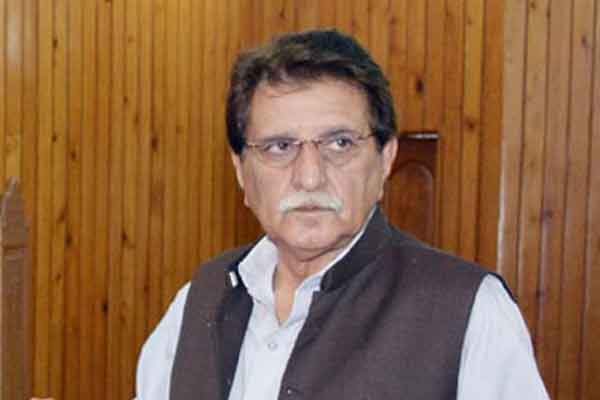 MIRPUR (AJK): Aug 07 :Prime Minister, Azad Jammu and Kashmir (AJK) Raja Muhammad Farooq Haider Khan Friday emphasized the need for forging complete unity and understanding to prevent the expansionist designs of the Indian.
Addressing AJK legislative Assembly in the state metropolis on Friday, he said Kashmiri have been subjected to brutal fascist military siege since illegal and immoral action of 5th august,2019 of Indian government, followed by efforts to forcefully change the demography of occupied Kashmir to fulfill its nefarious goals.
He said India is bent upon to rapidly change the majority of Muslims into minority in occupied Kashmir in pretext of illegal actions and called for taking serious steps by the Pakistani leadership for the liberation of occupied Kashmir, said an official news release issued here on Friday.
Leader of the Opposition in National Assembly Shahbaz Sharif also addressed to the session, the Speaker Shah Ghulam Qadir presided over the session.
He made it clear that our commitment is only with the people of Pakistan and similarly the people of Pakistan are interlinked with the Kashmiri people. There should be no ambiguity in this relation, he added.
He thanked people of Pakistan and political leadership for extending their unflinching support to the Kashmiri people in attaining their fundamental right to self determination.