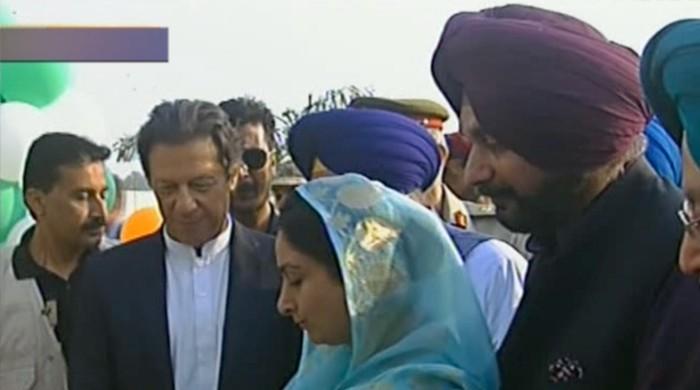 A large number of Sikh yatris ─ both local and Indian ─ along with Indian Minister for Food Harsimrat Kaur Badal and Minister for Housing Hardeep S. Puri, and Indian journalists and foreign diplomats are attending the ceremony.

The event began with the airing of a film about the pilgrimage of members of the Sikh community to the Gurdwara Darbar Sahib.

The project will be completed keeping in view the needs of the Sikh community.

Noorul Haq Qadri addressed the ceremony first, beginning his speech by greeting the premier, the COAS, the Indian delegation and all those attending.

“Today we are at an important point in history,” Qadri said. “This is where he left the world. I am referring to Baba Guru Nanak,” he said.

“The Kartarpur gurdwara will be made into a state-of-the-art gurdwara,” he said.

“Next year in November, a year from now, on the 550th birth anniversary of Baba Guru Nanak, the Pakistani government and the country are preparing to celebrate in a grand manner,” he announced.

“India’s Constitution says there will be no discrimination on the basis of caste or creed. Baba Guru Nanak said this 549 years ago,” Sidhu said.

He said there had been enough bad blood and that the corridor would be a major opportunity to open the doors of the hearts of the people.

Sidhu said that if the borders between both countries opened, it would be possible to transport goods to different parts of Pakistan and even others countries.

“This is my hope, this is my dream … While there is blood in my veins, I will continue to thank both governments,” he said.

“We have been so close, but so far for 70 years,” she said. “Scores of Sikhs are on this journey for the first time today.”

“I have no friends, no relatives here [in Pakistan]. I never thought I would be here,” she said.

“When we laid the foundation stone [for the corridor] in Indian Punjab, I saw the corridor becoming a reality there and now I am seeing it here.”

“Today this corridor will bring everyone together … It will bring joy and peace to both countries. I beseech you … to issue postage stamps or coins to commemorate Guru Nanak,” she said.

“The light that Guru Nanak brought with him remains today … We are here at this historic area where Baba Guru Nanak spent his last 18 years in worship.”

“Today we are laying a foundation stone for the Kartarpur corridor and fulfilling the wishes of our Sikh community,” he said.