﻿ Vessel registered in Pakistan will be exempted from custom duty, income tax till 2030: Zaidi | Millat Online

Vessel registered in Pakistan will be exempted from custom duty, income tax till 2030: Zaidi 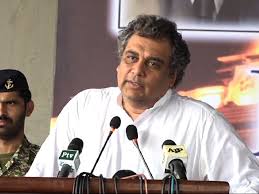 (Karachi) Minister for Maritime Affairs Ali Zaidi has said the vessel registered in Pakistan will be exempted from custom duty, income tax and sales tax till 2030.

Announcing a new shipping policy under which incentives have been provided to private shipping companies on Friday, he said the government wants to involve private sector in the shipping business.

He maintained, “The Pakistani flag carrier vessel will also have first berthing right at the port.” The minister stated the new shipping policy announced by the government would lift Maritime sector to new heights.

“This business friendly policy will reduce the annual freight bill worth $5 billion of Pakistan” he said.

The minister said that it would also generate employment opportunities for the seafarers and allied sectors. “The new sipping policy will also facilitate fishermen,” Zaidi pointed out.

He said that Pakistan resident ship owning company would be defined as a company registered with the Securities and Exchange Commission of Pakistan and having its own seaworthy vessels registered under Pakistan flag.

The minister said that shipping industry was vital as it operated during peace times as well as in emergencies and high risk.

He said that new shipping policy was introduced to expand and earn foreign exchange for the country.

Ali Zaidi said that in January 1972, all the industries in Pakistan were nationalized including shipping industry. He said that all the shipping companies at that time were merged in Pakistan National Shipping Corporation.

“Over the years, as the nationalization was reversed with privatization, the industry began to recover with the exception of shipping industry” he said.