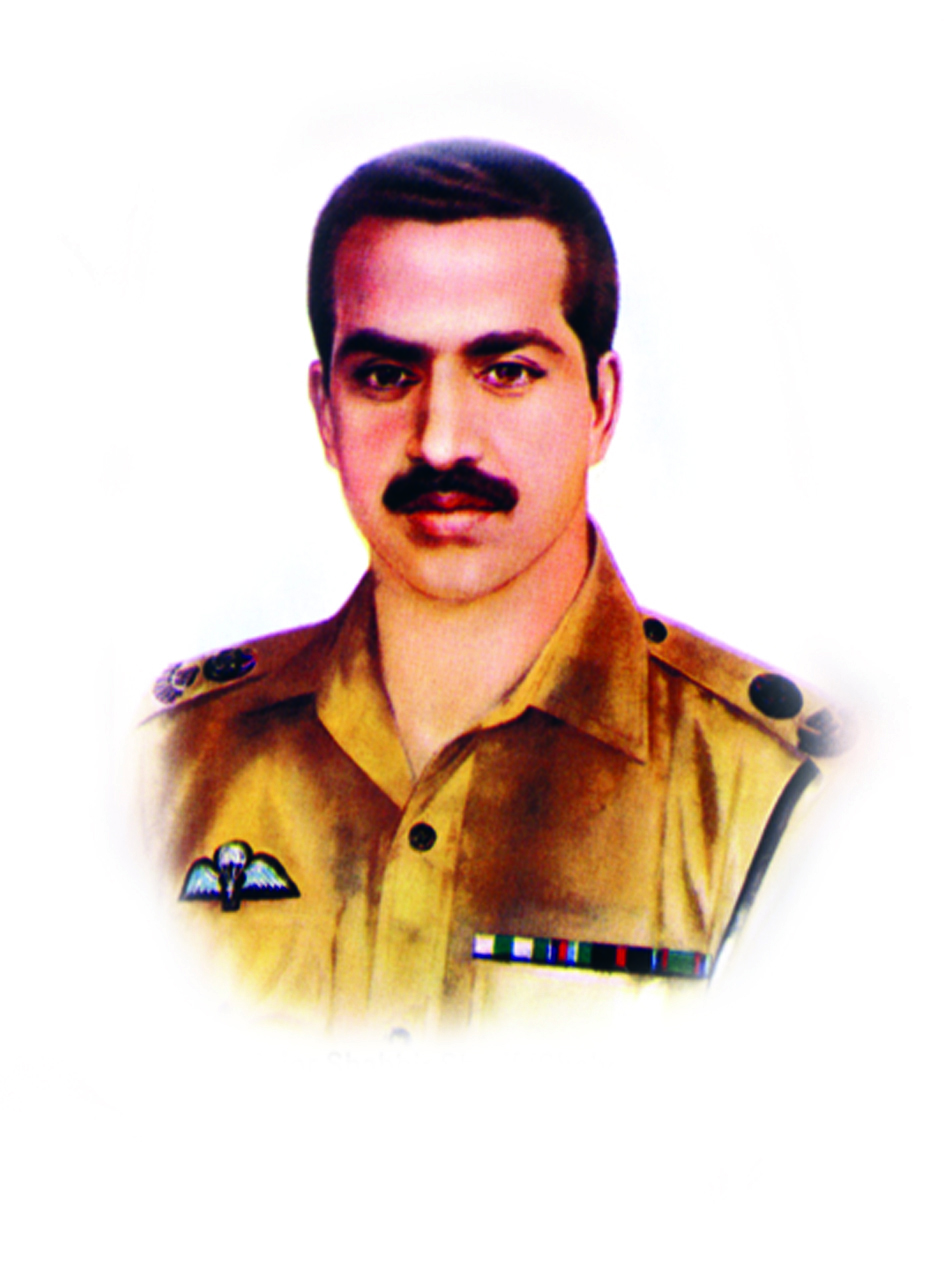 Written By: Brig (R) Farooq Afzal (Tamgha-e-Jurat)
The evening of December 3, 1971 will be remembered as the Blitzkrieg action all along the battlefront of Sulaimanki-Fazilka Sector. Although, it was an Independent Brigade Group action but the battle on ground was at company level within the framework of a battalion.

6 Frontier Force Regiment (6 FF) tasks were achieved with lightning speed, accuracy, surprise and shock effect. The enemy had no option except either to surrender or abandon their strongly held positions. Even, their strong canal-cum-bund based fortified defensive position (Sabuna Bund) once ruptured and penetrated, the enemy ran leaving all intact in their heavily prepared position including marked maps, weapons and ammunition, clothing, medicine, cash currency and even was unable to detonate fully armed charges to blow off the Gurmukhera Bridge.

B Company under command Maj Shabir Sharif captured the Gurmukhera Bridge on Sabuna Canal fully intact with a strong fighting patrol of 14 men led by then 2nd Lt Farooq Afzal. 6 men out of total 14 received fatal bullet injuries and embraced Shahadat on the deck. The remaining men kept fighting with the enemy. Sensing the situation, Maj Shabir Sharif immediately moved the remaining company on the Bund. Maj Shabir personally cleared number of enemy bunkers with hand grenades and other available weapons. Many enemy soldiers were killed, few captured and made prisoners of war. The enemy panicked and started running in different directions. The bund was cleared off the enemy after capturing every trench by the attacking troops of B company. The company heavy weapons and F Echelon were in the fire base and still had not moved forward as it was dark and the area was heavily mined and still held by the enemy. Their forward positions were very discreetly and silently bypassed which shocked the enemy once they found our troops holding the Gurmukhera Bridge on the Sabuna Canal.

On hearing the artillery shelling all along the international border, the villagers in the zone of battle started evacuating, carrying all what they could bundle on their carts and on their bodies. Our presence on the Gurmukhera Bridge was a great surprise for the runaway civilians. Many of them were old aged men and women, some young carrying their babies pleading for mercy and safe passage. None was harassed nor stopped rather all permitted to go and clear the area. Islam teaches us tolerance, patience to forgive and let go unarmed civilians. A very large number of villagers including a newlywed couple were overwhelmed being released unharmed with all their belongings.

Soon enemy tank noises were heard coming from the direction of Fazilka-Sulaimanki (metal road) in the south heading towards the Gurmukhera Bridge along the bund and also from the eastern direction of Gurmukhera village. The attacking troops of T-54 tanks were shot and destroyed by 3.5 inch Rocket Launcher and Energa Grenade from very close ranges (20-30 yards). The tanks kept burning like a ball of fire till dawn December 4, 1971. The same night enemy launched a quick counter attack supported by heavy artillery and tank fire but repulsed with heavy casualties. C company under command then, Captain Talat Omar had arrived and taken position along the Sabuna Bund securing our right flank.

The dawn of December 4, 1971 was a new day for B company to celebrate their victory on Sabuna Bund. As the sun began to rise, a large number of enemy troops with their personal weapons raising white flags and hands up started approaching Gurmukhera Bridge. These were the elements which were hiding in the villages or in the cover of crops in the fields, and, could not manage to escape. These men included one officer, one Junior Commissioned Officer and twenty soldiers. We had no other option except to line them up across the Sabuna Bund facing left Marginal Bund towards Pakistan. They were ordered to march with hands up facing the international border to report Subedar Shaiesta Gul who was Mortar Platoon Commander deployed opposite Indian Jhanghar Post. They were also cautioned that the entire column of troops was under constant watch and direct observation covered by machine gunfire from both the ends if any individual attempted to escape. Believe it, the entire group reached and reported at the mortar platoon location without any escort en route. No sooner when the squad of prisoners cleared the area, Indian Air Force (IAF) became active with their bold sorties. IAF Hunters, Gnats and Canberra were flying freely overhead to locate, fire and destroy targets. It was very demoralizing since our troops were still unprepared for the air strikes. Indian aircrafts fired machine guns and rockets on Sabuna Bund but fortunately no damage was done. They even rocketed Sabuna Bridge but missed. Napalm bombs were dropped around our Sadiqia Tower Post which was densely covered with wild growth and elephant grass. Despite free hand and no opposition except for few machine guns on anti-aircraft roll, the Indian Air Force failed to inflict major damages. Later, in one of their air raids they managed to damage a portion of the Sulaimanki Headworks bridge which was repaired immediately. An Indian aircraft was also shot by a Mujahid Force anti-aircraft gunner who was manning the gun on top of the headrail on the bridge.

December 4, 1971 morning remained hot and active with enemy artillery carrying out ranging for harassment and to register deeper targets. B company was still awaiting the reinforcements when the F Echelon truck hit the minefield in the vicinity of Indian Jhangar Post. It was followed by M-48 RR Jeep laden with remaining all types of ammunition. Naik Chinnar Gul who was at the wheels panicked and inadvertently bogged the jeep. Major Shabir Sharif seeing the situation from the bund ordered me to retrieve the jeep before it was hit by the enemy air strike. I immediately responded and rushed across Sabuna-Gurmukhera Bridge, dodged enemy’s direct fire with stealth and making full use of available cover on the ground. On reaching, I found both front tyres and a bumper fully bogged in a freshly watered field. Since I was alone, I had no other option except to reverse the vehicle with full throttle using 4×4 reverse gear. With Bismillah, I started the engine and with a big jerk, it moved out and I managed to recover the vehicle. As soon as I moved the vehicle, the enemy’s Observation Post (OP) which was observing from a vantage point started bringing artillery fire on my location. Luckily no round landed near me to cause damage or injury. With great precaution and speed, I was racing towards the bridge on Sabuna Bund. All this was being watched by Maj Shabir Sharif and other soldiers on the Bund. As I reached near the Bridge, the enemy started firing with small arms through the gap of the bund which was then not fully covered/protected. After a little pause, I again throttled the jeep, drove over the bridge and parked it securely along the bund.

I was congratulated by Maj Shabir Sharif for the small little valour. The next two days of the battle were hotly contested on Sabuna Bund. Maj Narian Singh from 4 Jat Regiment confronted Maj Shabir Sharif in the hard hitting counter attack on the night of 4/5 December. The Indian company commander was killed by Maj Shabir in a hand to hand fight before he could open fire. In the process Maj Shabir was also badly wounded by the phosphorous grenade which was lobbed by Maj Narian Singh. Despite my repeated requests in the morning, Maj Shabir Sharif never went back to receive first aid or medical treatment. After the war, it was discovered that the Indian company commander was awarded Vir Chakra. His dead body was returned after the ceasefire with honour in a simple ceremony. With him many other dead bodies were returned which remained under the debris of sand, mud, piles of emptied and destroyed wooden/steel boxes of ordnances buried in the Bund held by our troops. Many bodies got mutilated because of direct artillery hits. However, no body of the martyred soldiers was left on the battlefront.

Numerous counter attacks supported by armour and air were launched to recapture the Bund, which were comprehensively defeated. Throughout these bloody days, Maj Shabir Sharif stood like a rock, reckoned for his strong nerves, boldness and bravery with admirable leadership qualities. He embraced Shahadat with direct enemy tank gunfire on December 6, 1971 while engaging enemy tanks with 106 mm Recoilless Rifle. To him we pay tribute for his great valour and supreme sacrifice for the motherland. May Allah bless his soul. Aameen!