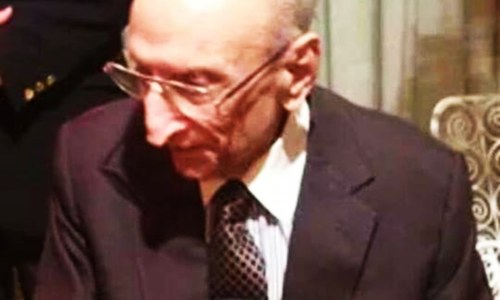 AN age has passed with the departure of Sahibzada Yaqub Khan, a man of many parts. Yaqub Khan had a lot to say to the country before leaving us for good. Unfortunately for us, he never wrote his memoirs and has taken with him all his memories to his final abode.

Where government service is concerned, it is a sad fact that the experience of the past is always lost with the passing of the older generation, and the accumulated wisdom of our elders is rarely codified to serve or guide us in the present and future.

Yaqub Khan had a close affiliation with three military rulers in Pakistan’s history. And yet he was estranged from the military establishment.

Also read: A leaf from history: Taming the bureaucracy

When he disagreed with the military action in what was then East Pakistan, he was demoted. He retired from the army in 1972.

Only a few years later though, he was back again in the service of another military ruler, Gen Ziaul Haq, and served as foreign minister at a time when Pakistan’s external affairs acquired their schizophrenic quality — during that period, the suit and tie were reserved for public forums, while the turban and beard called the shots from the lengthening shadows.

Despite his vast erudition and great depth of character, there are hardly any signs on record of any misgivings that he might have had about the contradictions that Pakistan’s foreign policy, under his stewardship, was straddling. In these times, another superpower’s conflict is winding down in Afghanistan, and India and Pakistan once again find themselves starting afresh on the road to peace amidst violent attempts by non-state actors to sabotage the process.

Meanwhile, the army finds itself under attack from the very shadows in which it nurtured its assets during Yaqub Khan’s time. Indeed, his honest counsel would have been invaluable for us.

Sadly, we are left to surmise what we can of his thoughts from the recollections of those who knew him in the closing years of his life.